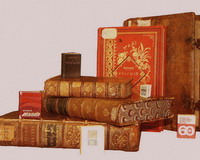 The book – a unique phenomena.  It can be looked at from numerous aspects – as a phenomena of spiritual culture and as a object of material culture.
A book – it is not only informational, a memorial of history; it is also a memorial of the fine art of a book.  Admirers of books, by rights, pay attention not only to the content and the literary mastery of the author, but also on the artistry of its adornments and the mastery of its production.
Among our library collections, a worthy place belongs to the collection of specimens of polygraphic art, past and current.   Visitors, who come for the first time to the Department of Rare Editions, turn their attention on these rarities, first and foremost.
So, we propose turning your attention to the examples of polygraphic art from the XIX-XX centuries, which will guide you into the world of artistic adornments of  the book, charming you with the richness of their form, beauty of their pictures and accomplished filigrees.


Ваша Ольга Сак.
Russian War Relief Past and present Ukrainian book "Knight in the Panther" Rustaveli (Moscow, Academia, 1936) or a virtual book launch Network of relationships or ages Anthology of Ukrainian poetry Ruslan and Lyudmila in Gypsy On a note book lovers Print time, or told that stamps Again on the Block, or the story of a rarity On second life book binding skills and book culture in general ... Library attacks, or SV Yuferova in Kherson
✖